Jacob Bunka is stumped: The 79-year-old cannot recall the exact number of Jews from his hometown who sur­vived the war and returned home afterwards.
So the feisty man begins rummaging through his desk drawers, frantically search­ing for a document listing the survivors. Papers, once meticulously organized in bulky folders, now form a chaotic clutter on his desk and adjacent workbench.
The mess mounts. Bunka is told not to both­er. He doesn’t listen.
„I need to know for myself,“ he says, wav­ing his arms dismissively.
His doggedness is understandable. After all, he is a product of prewar Jewish Lithuania, a culture that survived 600 years of unrest. In addition, his native village, Plunge, is situated in the northwest Zemaitija region, whose inhabitants, the Lowlanders, are renowned for „sticking to things.“
„We lived at the end of a Jewish street, near Lithuanian houses,“ says the soft-spoken man with disheveled white hair. „We used to play with them [the non-Jews], too, and fight and play and make up again. So I have double stubbornness. But if I was not stubborn, there would be nothing left in Plunge.“
Bunka, who stands no more than 1.52 meters tall in his purple-and-white 1980s hightops, is the last Jew in Plunge, a once vibrant, 2,500-member Jewish community. He has dedicated his entire adult life to fulfill­ing a promise he made to himself in 1941 while fighting the Nazis: to forever immortal­ize the annihilated community known as Jewish Plunge.

I made a promise to myself. I wanted to commemorate everything and just for that I felt the need to stay here. I made much more here for the Jewish people. In Israel, I’d just be a simple artist, but here I made memorials and valuable things like a museum. 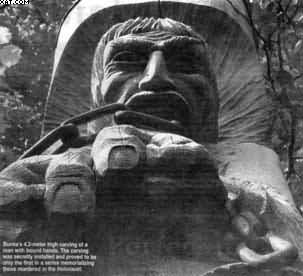 Since 1990, the 84 stones, the oldest from 1760, have been peacefully resting in a semi­circular display near the original cemetery. Bunka maintains the site and later erected a memorial stone where visitors recite the Kaddish memorial prayer. Last year he counted 147 visitors from places as diverse as Korea and Zimbabwe.
His book, Plungyan: A Memoir, provides a historical overview of pre-war Plunge, the Holocaust, the Russian front, and postwar resettlement. It also follows the fate of Plunge Jews and their descendants who emi­grated. It’s an amazingly detailed summary for a man who never attended university or used a computer. His knowledge was gath­ered from witnesses. Excerpts from his book will be published in the Plunge newspaper later this year.
His research turned up 15 Lithuanians who had participated in the mass murders. Most of them served 10-year prison sentences under the communists for fascist collaboration. Today they are all dead.
‘There was one guy and I didn’t let him live in peace. I always reminded him of it. So he sold his house and left,“ says Bunka.

Of the 72 Plunge Jews who teamed up with the Soviets, 42 died in combat, including Bunka’s father and brother 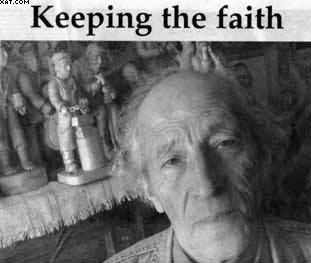 Still, she dreams of a separate „Jewish room“ at the school, with her own television, VCR, CD player and Jewish decorations. But with Lithuania’s underfunded educational system, her expectations remain low.

„I get tired at times. Lithuania won’t become tolerant quickly. But this is my duty as an intellectual.“ -A.E.