New project on Litvak heritage in Lithuania and Belarus:

Friends of the Fund

Thank you for your support!

From Wikipedia, the free encyclopedia

pronunciation (help·info), Samogitian: Plongė) is a city in Lithuania with 23,246 inhabitants. It has a crab stick factory which exports to many countries in Europe.

Before World War II, Plunge had a large Jewish population (see The Holocaust). Known as Plungyan It is thought that the territory in which Plungė is situated was inhabited in 5th–1st centuries BC. After the Treaty of Melno country seats were started establishing in the forests of Samogitia. From the 14th century to the middle of the 16th century, Plungė was a part of Gandinga volost as an ordinary settlement. Later, the population of Plungė started to grow faster and surpassed the population of Gandinga. In 1567 Plungė was mentioned as a town.

During the interwar period there was established gymnasium in 1925 and built railway branch-line in 1932. In 1933 current Catholic Church was consecrated. Since the private hospital was founded in 1939, maternity, surgical sections started their activities. Jewish community composed about 44% of inhabitants whereas about 55% of inhabitants were Lithuanians. According to that Jewish were active participants governing the city. However in events of 1941 almost all Jewish community was destroyed by Nazis.

During the years of the independence of Lithuania Plungė’s economic was based on the factory of fibre flax and cotton Kučiskis – Pabedinskiai and also on the activities of Jewish businessmen and agricultural products made by Samogitian farmers.

After the World War II and soviet occupation, Plungė started to grow rapidly – if the city had 7,400 inhabitants in 1950, in 1990 it had already had 23,300 inhabitants. During the years of soviet occupation, Lithuanians became the majority of city’s inhabitants. According to Government’s Resolution of 1963, Plungė should have become regional centre with a strong industry. However these plans were ruined when it became obvious that the city doesn’t have enough water resources although some high level companies representing various branches of industry were established in Plungė. Most of these companies however bankrupted after the Independence of Lithuania was announced.[1]

The coat of arms of Plungė was affirmed by the decree of the President on June 6, 1997.[2] In 2009 Plungė was elected Lithuanian Capital of Culture.[3] Nowadays Plungė is the sixteenth largest city of Lithuania having 22,287 inhabitants.

Gintare at the Tourist Info and Zita at the Public Library were most helpful. Note that Tourist Info is near the railway station and library and not the town square. Zita showed me an Jewish exhibit she had previously run at the library.

Eugene, is the son of Yaakov Bunka, the wood carver and The Last Jew of Plungyan. Eugene gave me an excellent tour of Plunge and surrounding areas.

Yaakov’s house which will become a museum

A Holocaust Site on the way to Salantai 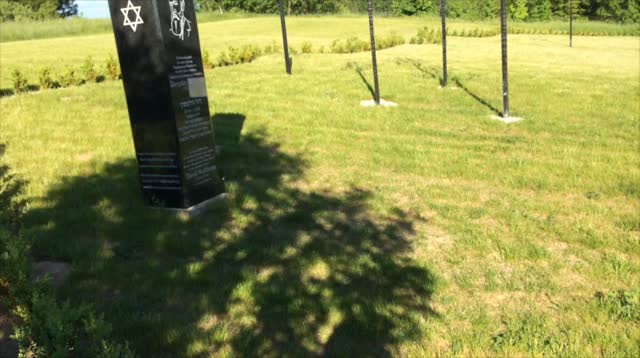 „It is very important for the World to know how we lived, not only how we died.”

Thank You for visiting. The page is under construction now. Sorry for possible inconvenience. Your opinion is very important to us. Send it to: info@jbfund.lt